MALTA –Misty Kuhl loves being in the outdoors. She runs, backpacks, cycles, climbs, paddles and snowboards among other activities.

Kuhl, who grew up in Dodson and now lives in Malta, is excited to help other women get outside and try new things. That led her to design Girlzilla, an online business set to launch next summer.

Kuhl knows that there can be barriers to getting involved in outdoor activities and one is cost.

“I worked at an outdoor retailer for five years,” Kuhl said. “Sometimes people would come in and get really excited about trying something new but then when they saw how much a backpack or hiking shoes cost, their faces would fall. They couldn’t afford it.”

She experienced the same situation herself many times, one of which provided the seed idea for Girlzilla.

“When I first started out as a whitewater guide, I really wanted a dry suit because we trained in March.” Kuhl was in northern New Mexico and they were in the water when there was still snow on the ground. “I couldn’t afford a dry suit so I looked everywhere for a used one.” Kuhl ended up buying a man’s medium on a clearance website and it worked fine but the fit wasn’t the best.

“I remember thinking that there has to be other women in the United States that have this gear and want to sell it,” Kuhl said.

Another barrier she found was the intimidation factor. Through her retail experience, Kuhl realized that many women felt intimidated when asking questions at outdoor stores.

As she imagined what Girlzilla could provide, the knowledge of this sense of intimidation led Kuhl to think about a space where women could ask questions and get good information.

“At Girlzilla, we are going to try to change things by removing intimidation and the cost of stuff as barriers to getting outside.”

Girlzilla customers will have the ability to buy and sell used outdoor gear, clothing and footwear to each other. But, because Kuhl wanted something bigger than simply an online, used-gear store, Girlzilla will also be a social network of sorts.

“Women interested in outdoor adventure can communicate directly with each other, building a community based on trust,” Kuhl said. This communication could be as simple as asking what a technical term means, or it could be a potential buyer of a dry suit saying to the seller, “I’m going rafting on the Grand Canyon this summer. Will this dry suit work for something like that?” The website will also provide a place for gear reviews, advice and travel tips.

While the website is being built, Kuhl, like any new business owner, is finding herself immersed in a steep learning curve. Between the internet and networking, though, she has found an almost limitless number of resources. Kuhl has also benefited from the skills and knowledge of friends and acquaintances. She has been surprised to realize how many people she knew who could answer questions and provide guidance.

Another surprise has been the support from Montana organizations and from her rural community. “I just moved back to Montana with my husband and the Montana community has been just amazing,” she said.

“Rural Montana has a surprising amount of connectivity. There are some really exciting things happening in Montana in tech and in every industry. I feel part of a community where people want to support each other and people want to create jobs. I was surprised at how many people are excited about bringing businesses to rural communities.”

Kuhl said that online businesses in particular can be a boon for rural areas and they can also remove a lot of barriers that stand in the way of entrepreneurship. As a member of the Fort Belknap Reservation, she is especially interested in what this could mean for rural and Native American communities.

Yet, Kuhl admits that the other side of this is that, with so much information, it can be overwhelming to figure out what you really need to know and what isn’t necessary. “I’ll chase the rabbit pretty far down the hole before I realize, ‘Maybe I don’t need to become an expert in this,’” she said.

In addition to being overwhelmed by information, Kuhl has run into the snags in development that many business starts face. Because she sets high expectations and is driven, it has been hard to deal with those bumps, yet she’s realized they are part of the process.

“I’ve met people who have their own start ups and they all say there are always setbacks. There are a lot of moving parts that have to move in the same direction.”

Having to slow down, though, has given Kuhl a chance to think even more deeply about Girlzilla and has given her the chance to dream a little bit.

“Girlzilla is in the parking lot, but while it’s in the parking lot, I can evaluate what we bring to rural Montana. I don’t want to limit the potential, but maybe thinking of building a business that can provide jobs in this community. It would be an honor to join the ranks of other Montana businesses who have set examples of what can be done in rural communities.”

Once Girlzilla is launched, Kuhl hopes it can be an inspiration for others to start their own businesses.

“I would like to emphasize that it is possible. Anyone can do it. If getting this out inspires anyone, that would be awesome.” 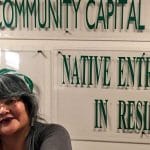